Today we welcome to the FOCC Medway blog our coordinators, Linda and Tony Baldwin. They are going to tell us how they got involved with FOCC Medway and about their roles within the charity.

We are Linda and Tony Baldwin and we have been the coordinators of the Medway group since January, 2015. This year’s visit was the fourth that we have organised and overseen. We originally joined the charity by agreeing to host a little girl called Nastya, whom we very soon fell in love with. She became our Belarusian granddaughter! Just a couple of years later, we found out that the Medway group was in danger of closing and so with much support from our chair of trustees and some of the original hosts, Tony and I stepped into the breach. It was January and only sixth months until the group of ten children, as it was then, were due to arrive. A steep learning curve followed! 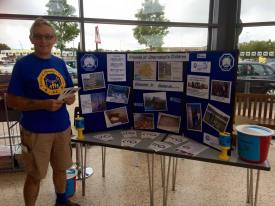 Tony and I are a team and so we split the coordinators job into two. We both have organisational skills and so Tony took on all the forms and paperwork – getting to grips with DBS forms, the rules and regulations of the charity and much more necessary but often mundane stuff – and I learnt to put an activity programme together for the four weeks that the children are here in the UK. The hardest thing for me was asking companies/organisations to host our children for a day, for a very discounted price or, even better, free. The coffers were very low!

Another major aspect of the job was to organise and arrange events to raise the much needed funds so that we could continue to bring these children the necessary respite from the ongoing effects of contamination from the Chernobyl disaster.

That first year happened! The children duly arrived. We collected them all at Gatwick and delivered them to their respective host families. As I recollect, it all went well. The programme was a success and Tony was our only minibus driver, but we survived! Within a month of the children’s return, with their suitcases laden with warm clothing, toothbrushes, toothpaste, instant coffee, paracetamol, vegetable seeds and much, much more for their families and siblings, we started the process all over again.

Later in 2015, we were privileged to visit Belarus. We wanted to increase the group to 12 children as funds were improving. We filled very large suitcases with many supplies to give out to the families we interviewed. We hired a car and driver and also an interpreter who had a list of names and addresses of children/families to visit.

Although we had seen many photos of the situation in Belarus, we soon became aware of just how difficult their lives were. We found many families lived and slept in one or two rooms. Often, they had no heating, no running water, and maybe only a hole in the ground for a toilet. There were bare floor boards, no warm bedding, no toys for the children and, most importantly, little or no food in the fridge. Apart from this, we soon realised that we had far more children that we wanted to bring….in fact every one that we visited!

We came home emotionally wrecked and then trawled through the forms and notes that we’d completed to try to choose the two children to join the Medway group. We sent the details of the ones that were left to a central point, where they are distributed if requested to other FOCC groups that are unable to travel to Belarus.

The following year, 2016, saw eight of our group in their last year of their series of visits. We arranged a few extra special trips, including one to London to see some of the sites! It was a very emotional time for both the children and their host families, with lots of tears on the last day.

So, again, we went back to Belarus later that year to choose another eight children. We were also very busy trying to recruit eight new host families.The main FOCC charity had moved their focus to a new area to the south of Mogilev. It seemed even more desperate for help. When we returned home, it was so hard to make a decision on which children to help and we could not stop at just eight. We decided on ten new children and because one other was not returning, it made our group up to thirteen. 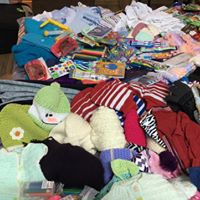 The 2017 visit was a very memorable one for various reasons. We had ten new children who were not the best behaved when together each day. Fortunately, though, they were fine at home for their host families. We also had a child arrive who developed Chickenpox a couple of days in … and a slight panic that if the others developed this too they would not be able to travel home on the designated flight! As Christians we prayed a great deal for this group and all the difficulties, and we praise God for all the answered prayers.

One amazing thing, apart from just a single child having Chickenpox and recovering within a week, we had an energetic and talented full time helper, Michael Pearce, join us for the whole month, courtesy of John Lewis and their Golden Jubilee programme. He was such a blessing.

So we survived another year….and decided to increase our group again, to fifteen. That is our absolute maximum! This time, however, we approached the central point and requested two more children – one child who we’d interviewed the previous year had not been selected, so we chose her and one other to come on this year’s visit, 2018!

Each year we are able to make improvements to the group. We now have a uniform for each child, the two interpreters and all of our helpers to aid with recognition when we are out on trips. As we have gained new host families, they have been willing to become more involved with the daily running of the group, both during the visit and throughout the planning and fundraising events too. We realise that as a group we are very fortunate to have this support. We could not do it without all who are involved, in whatever way that is.

Each year brings its own challenges, such as finding new host families for children and this year for two interpreters. Fundraising is constantly an important factor, as is keeping a raised profile of the charity, which we do with our Facebook page (https://www.facebook.com/foccmedway/) and our new website (www.foccmedway.org), set up by one of our talented hosts.

I hope this helps you understand who we (Linda and Tony Baldwin, coordinators of FOCC Medway) are and what we do. We are passionate about our charity and the work that is involved. An important fact is that we are all volunteers. The charity has no paid workers nor the upkeep of any offices. All of the money raised goes to the children and the families of Belarus.

Please donate to our cause

You can do so via our My Donate page here: goo.gl/VQFtkp.

You can also get in touch with us by contacting Linda and Tony – FOCC Medway’s coordinators – on our Facebook page or email: foccmedway15@gmail.com.

Friends of Chernobyl’s Children (FOCC) – Medway funds yearly recuperative visits of one month for socially disadvantaged Belarusian children (aged between seven and twelve) from the areas still devastated by the 1986 Chernobyl nuclear disaster. All money donated is used directly to support FOCC Medway’s objectives and there are no paid officials in any part of the Charity. Charity No: 1095997. If you would like to learn more about what we do, please see here: https://foccmedway.org/our-group/.